This is a very “Alpha” version of this tool”. It has opportunity for simplification. But is a good starting point. It likely will be more annoying than just doing it by hand. But here it is any way.

Set the length and width of your roof base, include overhang, so it may not be equal to the ceiling, or ceiling plus plates. This can be done in the “Sketch” ( Constraints, Length, and Width )

Make a clone of the Joist to place “in situ”, this joist can then be mirrored / copied if necessary. 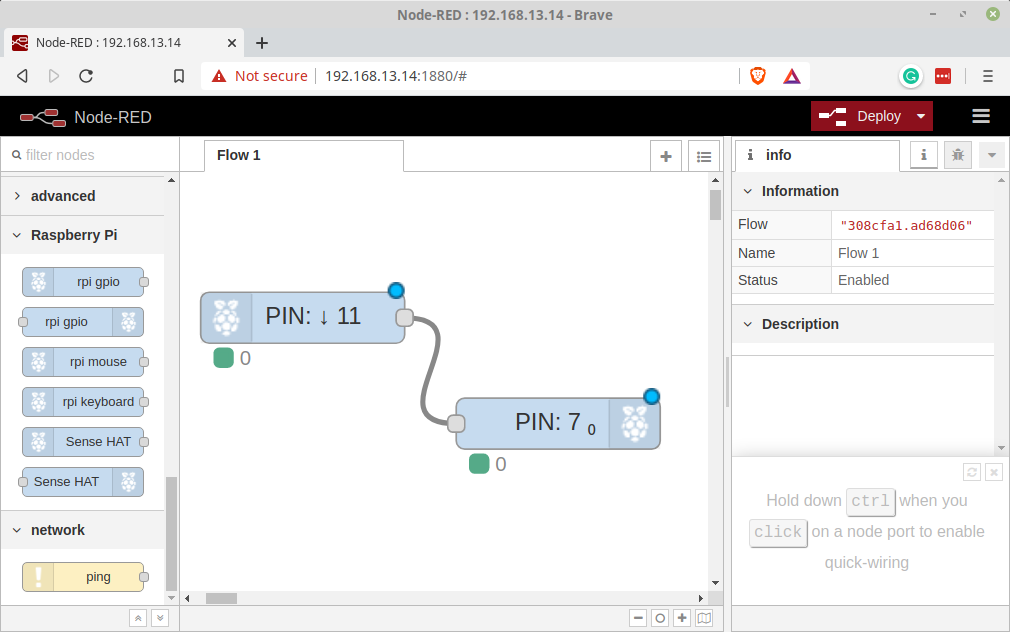 This simple experiment will demonstrate using a push button to light a LED.

Adding a Push-Button to an LED in Raspberry Pi doesn’t get much easier than with NodeRED, two nodes, and you are done.

Wire the LED and Button as shown in the Diagram

If you simply want to try this Flow, you can import this:

To run this experiment we will use only two nodes rpi-gpio In and rpi-gpio out. Drag one of each onto the Flow edit pane.

When you drop the Nodes the Labeling is updated to reflect the configuration. The two Nodes before wiring will look like this. There has been nothing done to them other than dropping them onto the flow.

Wire the Nodes together

The node Should change to PIN 11

The Output Node should now be labelled PIN: 7

If you have done everything correctly you should now be able to press the button and the LED will light. 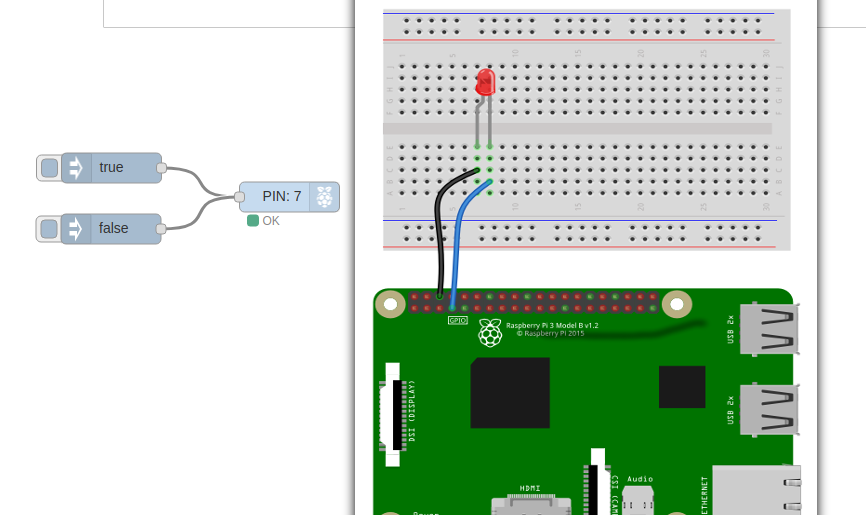 Using NodeRED to program your RaspberryPi for GPIO Control.

The basic installation of Raspian includes NodeRED. However you need to start it to use it.

Connect to your Raspberry Pi using your terminal. Issue the NodeRED startup command:

The first line after the “Start Node-RED” will contain where you need to point your browser. Remember that your Raspberry Pi is a fairly small computer so it might take it a little while to load ( possible minutes ).

The console will update once Node-RED has started, it is ready when you see the final line state “Server s now Running …”

Now we can connect with our browser

We will use the Inject Node as the “Button”, Drag one of the Inject nodes to the Flow area:

Double click the node to open the edit panel. From the Payload drop-down select boolean and leave the value as True.

Click Done, and you will see that the Inject node now reads as “true”

To easily find the Raspberry Pi nodes type rpi in the node search tool at the top left. Drag a single rpi gio Output node to the Flow area and drop it near the Inject Node.

Wire the Inject node to the gpio node:

Double click the PIN Node ( rpi gpio ) to enter into edit mode and select Pin 7 and make certain the type is Digital Output.

Add the “Off Switch”

Let’s Drag a Second Inject node onto the Flow area

Change it to boolean and set the value to false.

Wire the “false” node to the same pin as the true node.

The final step before you can use either of the buttons is to Deploy the Flow.

Clicking the small blue box next to the “true” inject node will turn the LED on and “false” will turn it off. 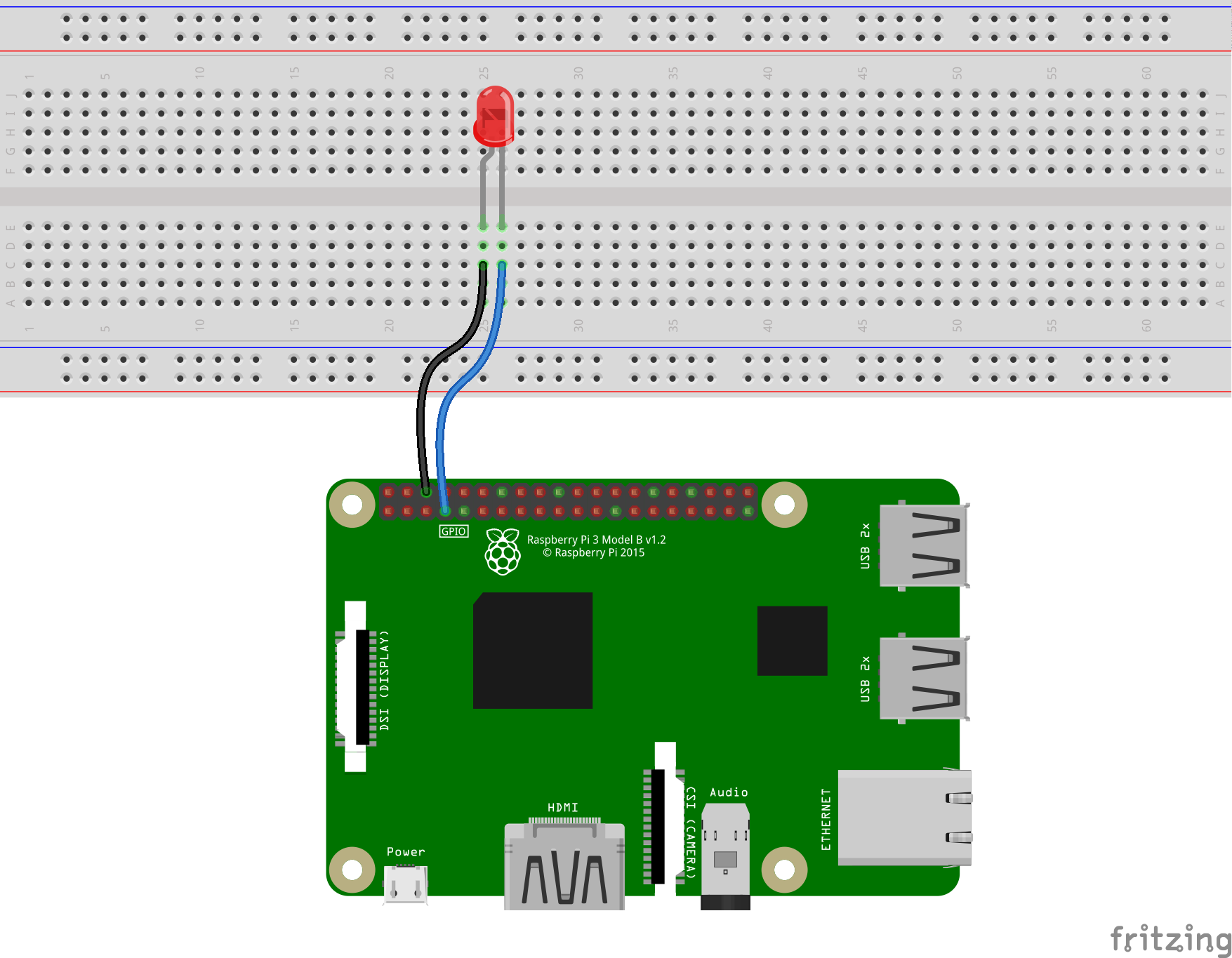 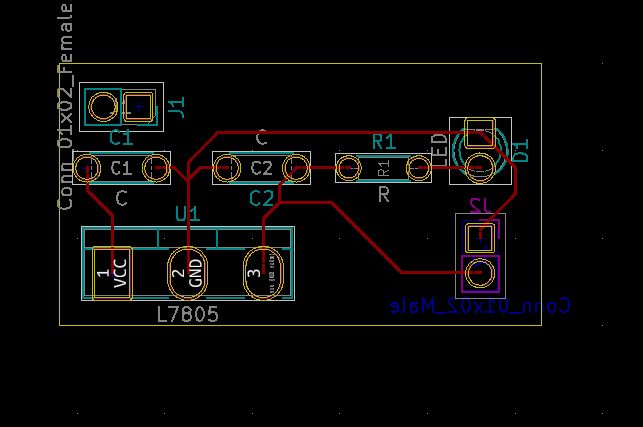 After we have created a Schematic, Annotated and assigned Footprints we can create a PCB and bring in components from the schematic.

Come Back Soon! This is in progress. Should be done by Friday July 10th. If you just can’t wait you might be able to muddle through with the diagram below. I still need to hookup J1 tho.

Get the Symbols from Schematic

The first thing we will need to do is “import” the components, using the symbols from the schematic. This process will use the Footprints we assigned previously to place the Components base on the Symbols we selected in the Schematic. ( You might want to read that a few times.) 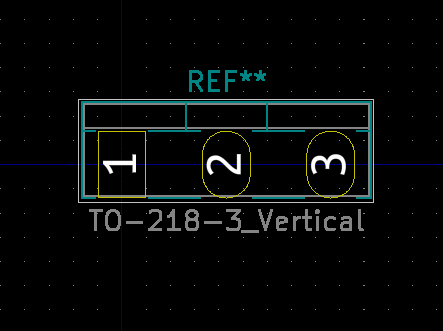 KiCAD abstracts the Symbols on a Schematic from the Components on the PCB. To get from one to the other we need to assign a Footprint to each Symbol. There are multiple ways to accomplish this, we will start with the batch tool to do all of them at once for the Basic 7805. 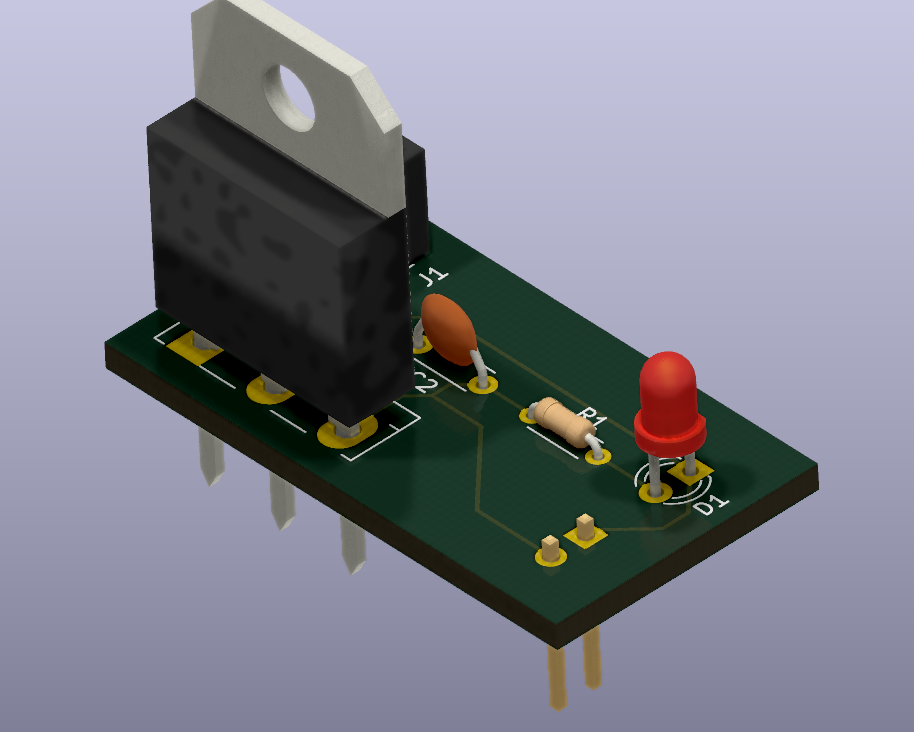 From to Design to Circuit Board.

This Tutorial will cover the use of KiCAD to create a Schematic, PCB and send that PCB to a Manufacturer. It is not a tutorial in the underlying electronics or electronic theory. Use of circuits in this tutorial are at your own risk and should be limited to educational purposes only.

The first step in getting a circuit board ready to be manufactured is to create a schematic. This Step-By-Step how-to will walk through the creation of a very basic implementation of the L7805 5v Power Regulator. 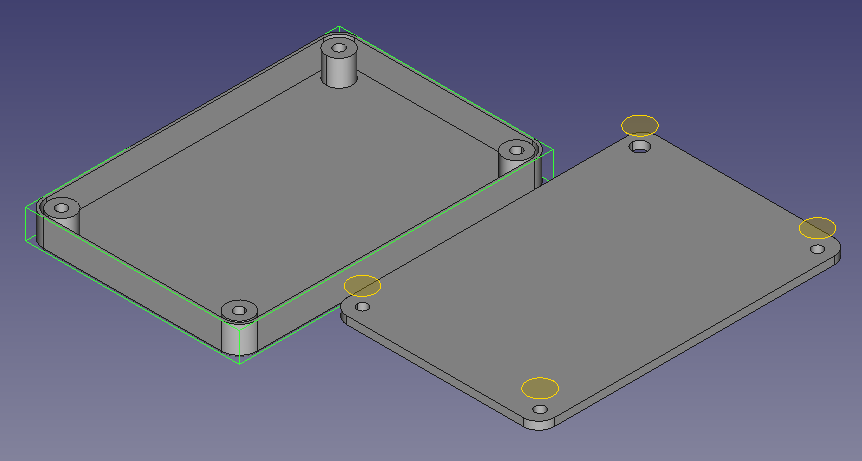 A dead simple case, using only Primitives in the FreeCAD Part Design Workbench.

This model was created to facilitate the demonstration of Shape Binder.

The model is only available if you login with your Patreon account.

This is a generalized drawing of an Epinomous 608zz Skate Bearing. This diagram can be used alongside tutorials in various CAD systems. 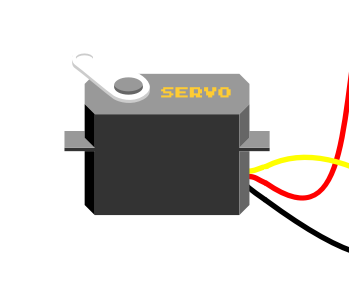 In order to easily code for a Servo motor, it is best to use a library. This example uses the Servo.h library from barraganstudio.com

The code below is from the example, but with the pin changed and the comments removed.

The wiring for this example is very simple